IPCC 2019 Land Report
Ch. 5 Food Security
​
IPCC 2019 Special Report on Climate Change and Land
​
​SPM A2. Since the pre-industrial period, the land surface air temperature has risen nearly twice as much as the global average temperature (high confidence). Climate change, including increases in frequency and intensity of extremes, has adversely impacted food security and terrestrial ecosystems as well as contributed to desertification and land degradation in many regions (high confidence).

​​This  suggests that climate change has  modulated recent yields on the global scale and led to production  losses, and that adaptations to date have not been sufficient to offset  the negative impacts of climate change, particularly at lower latitudes.
​​
​​FAO-IPCC  EXPERT MEETING ON CLIMATE CHANGE,  LAND USE AND FOOD SECURITY,  January 2017
​Climate change is expected to impact on crop production, livestock production, fisheries and aquaculture. There is robust evidence of negative impacts from heat and water stresses on crop yields

1.1 Projected productivity changes and extreme events
1.1.1 Crops
In terms of global temperature and the yield response curves for crops such as wheat and maize, the main change in AR5 compared with the Fourth Assessment Report (AR4) is that a 1 or 2 ºC warming to increase yields in temperate regions is no longer expected​​ 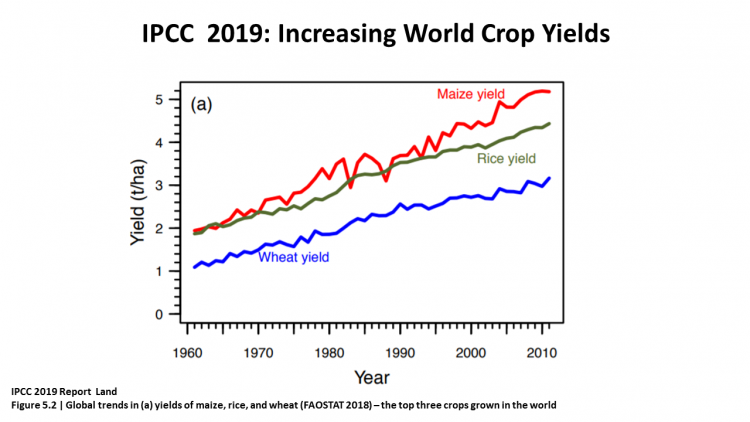