Many important grain crops tend to have lower yields when summer temperatures increase, primarily because heat accelerates the plant’’s developmental cycle and reduces the duration of the grain-filling period (CCSP, 2008a; Rosenzweig and Hillel, 1998).

Exposure to extremely high temperatures (e.g., > 35C) can also cause damage in photosynthetic, reproductive, and other cells, and recent evidence suggests that even short exposures to high temperatures can be crucial for final yield (Schlenker and Roberts, 2009; Wassmann et al., 2009).
The commitment of increased climate change and increased damages to crops.

For food security for humanity (all future generations) there is another huge problem arising from the models and how their results are applied.


That problem is the lag effect of an increase in the atmospheric GHGs concentration and the full amount of global temperature increase caused by it.
This fundamental aspect of the climate science is not accounted for in policy considerations for estimating climate change danger.

Today's already absolute committed global average temperature increase from the ocean heat lag alone is 1.6° C. With the aerosol cooling factor it is 2.4°C up to 4°C
The dual aspect of climate change emissions and food production
Food production is both a victim of global climate change and a cause by being a source of all three main GHGs.
Greenhouse Gases
​
The more greenhouse gases (GHGs) there are in the atmosphere, the more heat is trapped in the lower atmosphere heating the surface of our planet.

Too much water is as bad for agriculture as too little and under global climate change we get more of both.

Most of the extra rain gets driven to the far north and south. More will fall over the oceans, so all in all agriculture suffers.
CO2 Fertilizer effect
​Carbon dioxide, unlike the other global warming greenhouse gases, potentially has a beneficial effect for plant growth. Plants utilize the carbon dioxide in the air together with sunlight to manufacture their energy (photosynthesis).
Potentially, there is this so-called carbon dioxide 'fertilization' effect from increasing the ambient carbon dioxide.

​​But research finds this results the result is less nutritional crops, so a non benefit ​(2018, Christopher Weyant, Anticipated burden and mitigation of carbon-dioxide-induced nutritional deficiencies and related diseases: A simulation modeling study, July 2018, )
​
Under a situation of uncontrolled greenhouse gas pollution and global warming, which is our current situation, any potential effect from carbon dioxide fertilization will at best be modest and short lived, as the IPCC says.

​​With the abruptly rapid rise in atmospheric CO2 over the past few decades if there were a significant CO2 fertilization effect it would have been very obvious by now, with a big rising global food production- that has not happened over this recent period
​
It will inevitably be overwhelmed by all the adverse effects on plant reproduction and growth as the world becomes warmer caused mainly by the carbon dioxide increase (along with the increase in the other GHGs).
Atmospheric greenhouse gas pollution has many adverse impacts on crop productivity and security. They are the following:
The chart opposite lists the important known effects of global warming climate change on agricultural food production, both positive and negative.

Increasing the CO2 in the air potentially has a beneficial fertilizer effect on crops.

Tropospheric (or ground level ozone) is increased with increasing temperatures and is toxic to green plants.

The crosses indicate the impacts that are not included or poorly represented in the climate crop computer models (according to the IPCC).

The IPCC assessments provide policy makers with a very limited number of the adverse effects of global temperature increases and climate changes on crop yields in different parts of the world. These are on very limited number of crops- just a few cereal crops.  Little research has been done on the crops in the most vulnerable regions.
Due to the number of highly significant inevitable adverse impacts which are not or inadequately included in the climate crop models, the assessment results given by the scientists should be assumed to be large under estimates.

The 2010 National Research Council assessment points this out by saying the following:

The expected impacts  are useful as a measure of the likely direction and magnitude of average yield changes, but fall short of a complete risk analysis which would, for instance, estimate the chance of exceeding critical thresholds.

Today's absolute temperature increase commitment is 1.6° C due to the heat lag from the oceans.
The illustration opposite shows this situation of climate change commitment to reductions of crop yields.
Most scientists say we already committed to an increase of above 2°C.
Recent publisihed science puts our commitment today as high as 2.4° C (Ramanthan, Feng PNAS 2008).
So if a policy maker wanted to avoid exposing all the agriculture of future generations to a global average temperature increase of 2°C (for example), calculating this from the climate crop model results for 2°C will not work for the food security of all future generations.

The policy will have to be based on preventing a temperature increase of 1.0°C. Many of these harmful effects will impact on a local or regional crop all together at various times.

Many of them make crops more vulnerable to diseases.
Increasing extreme weather events from global warming and climate change are particularly difficult to predict by modelling and particularly damaging.
In the real world the end result of all the combined and cumulative combination of all the impacts cannot be modelled and is being ignored.
The science of the effect of global climate change on food is based on climate crop model results.
​
Only the main cereal crops have been included in assessments​.
​
​In June 2018 the research on Effect of environmental changes on vegetable and legume yields and nutritional quality, was published, which points to a large negative impact from combined climate change effects.
​
​​The science of risk and risk assessment should be applied to climate change and food security.
The multiple adverse effects of global warming and climate change on food security is very complex involving many combined additive and cumulative effects - too many to be captured by climate crop models.​ ​Ground level ozone increases with global warming is toxic to green plants inhibiting photosynthesis. Research has indicated that this effect could be very large as temperatures increase, but it is not captured in the climate crop models.
Troposheric (ground level) ozone Policy makers use the climate crop model results of the last assessment of the Intergovernmental Panel on Climate Change (IPCC)  for expected climate change impacts,though they are clearly ignoring them). For food security this 2007 assessment is out of date, being based on science up to January 2006. Another 2007 assessment on the topic is by agricultural economist Bill Cline Global Warming and Agriculture Estimates by Country (see Cline). A more up-to-date assessment is provided by the National Research Council's (NRC)  2010 Climate Stabilisation Targets.
The world's top food producing regions are in the Northern hemisphere
​and central continents. Global warming is faster in the N hemisphere than the south about double now. Warming is faster in central continents regions- about double with more global warming. 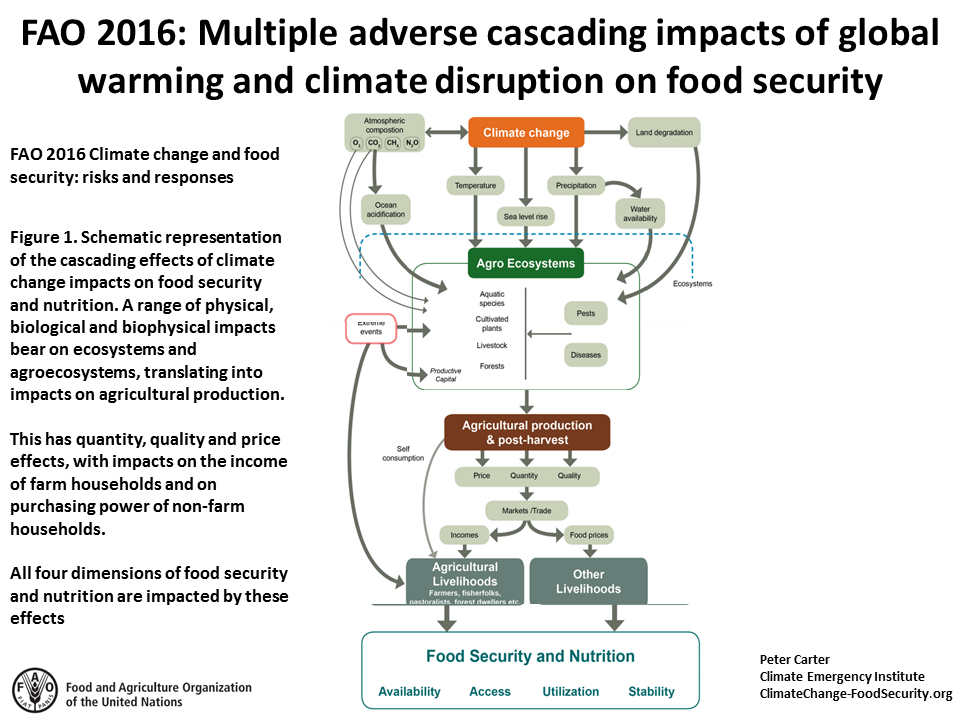 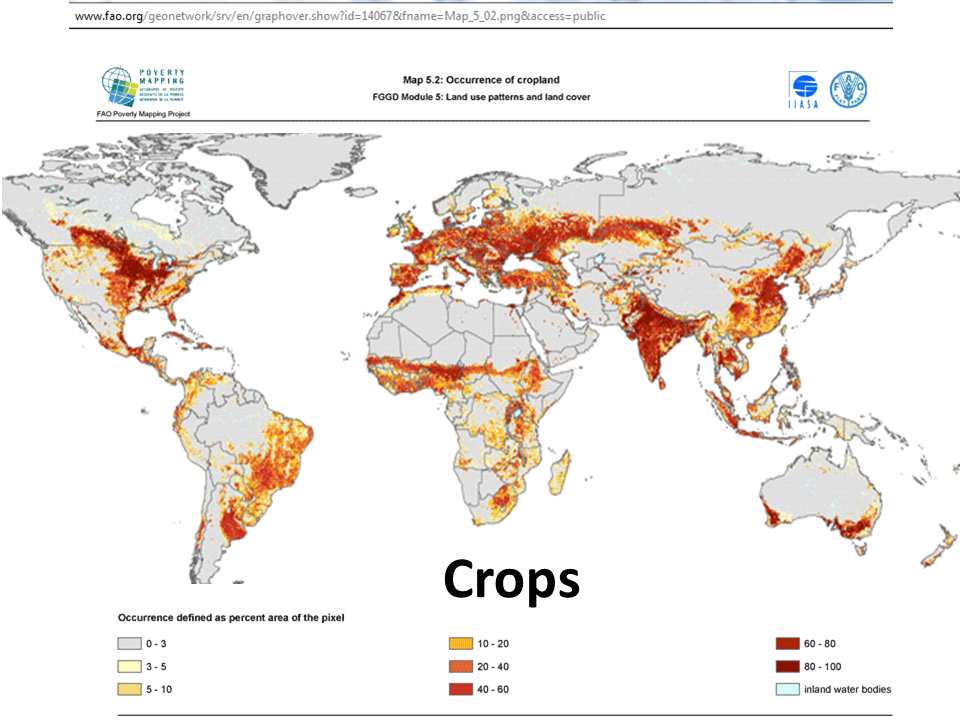 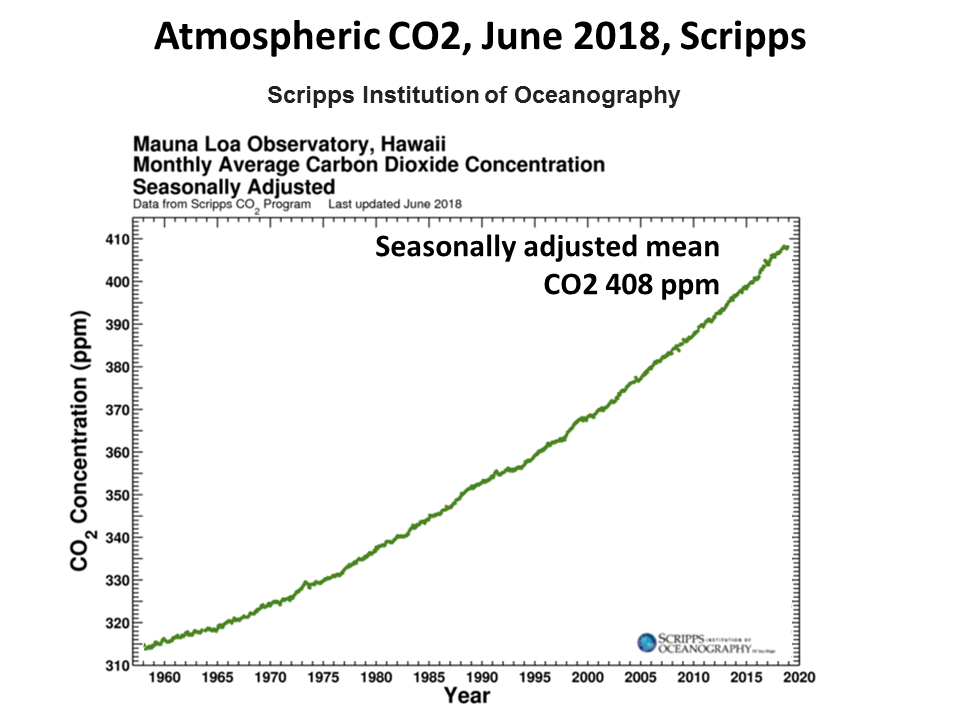