Climate Change and Food Security
​
​Tropospheric (ground level) ozone
Tropospheric / ground level ozone is highly damaging to crops and it increases as global warming increases. But this large adverse effect is not in the climate crop models.
​
Ozone has significant adverse effects on crop yields pasture and forest growth. Increasing ozone concentrations in the future with or without CO2 fertilization will negatively impact on plant production, possibly increasing exposure to pests. (IPCC 2007 WG2 Ch5 Box 5.2)
MIT, Human-generated Ozone Will Damage Crops, Reduce Production.
​J. Reilly et al Energy Oct 2007
​
Even assuming that best-practice technology for controlling ozone is adopted worldwide, we see rapidly rising ozone concentrations in the coming decades," said John M. Reilly, associate director of the MIT Joint Program on the Science and Policy of Global Change. Without emissions restrictions, growing fuel combustion worldwide will push global average ozone up 50 percent by 2100. Crops are hardest hit. Model predictions show that ozone levels tend to be highest in regions where crops are grown. In addition, crops are particularly sensitive to ozone, in part because they are fertilized. "When crops are fertilized, their stomata open up, and they suck in more air. And the more air they suck in, the more ozone damage occurs," said Reilly. Without emissions restrictions … crop yields fall by nearly 40 percent worldwide. Northern temperate regions ... crop losses associated with high ozone concentrations will be significant. In contrast, the tropics, already warm, do not benefit from further warming, but they are not as hard hit by ozone damage because ozone-precursor emissions are lower in the tropics. The net result: regions such as the United States, China and Europe would need to import food, and supplying those imports would be a benefit to tropical countries MIT. 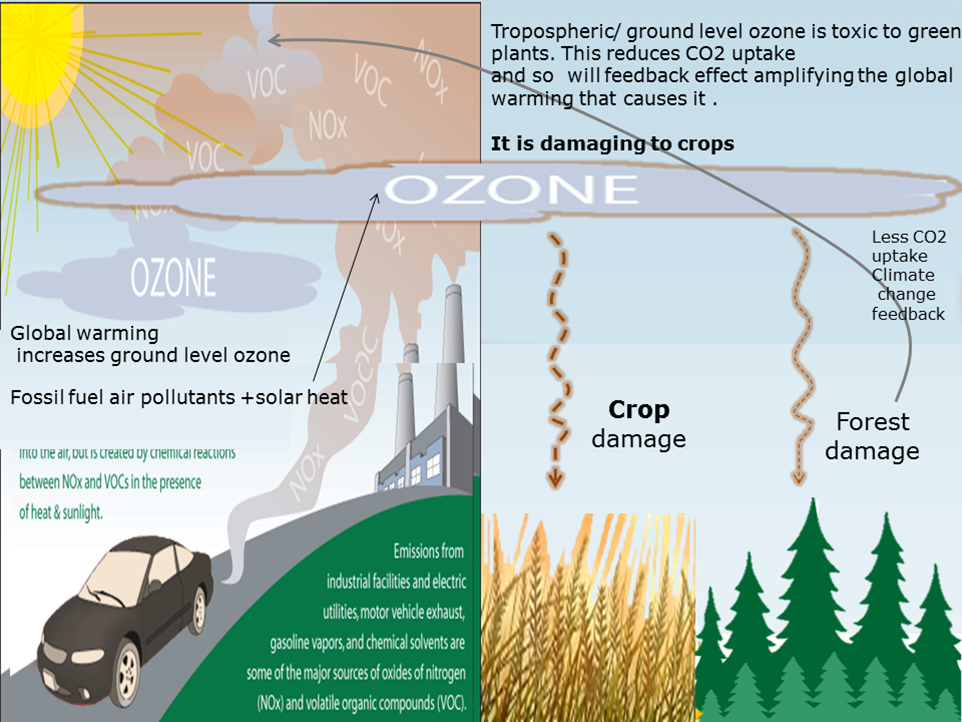 Our results suggest that O3 pollution poses a growing threat to global food security even under an optimistic scenario of future ozone precursor emissions.

​​The yields of major crops across the globe are already being signiﬁcantly inhibited by exposure to surface ozone.

​​In the A2 scenario the global year 2030 yield loss of wheat due to O3 exposure is up to 26% (a further reduction in yield of up to 10% from year 2000 values), up to 19% for soy bean (further reduction of up to 11%), and up to 8.7% for maize (further reduction up to 3.2%).
​
(​Global crop yield reductions due to surface ozone exposure  Year 2030 potential crop production losses and economic damage under two scenarios of O3 pollution Shiri Avnery et al Atmospheric Environment 2011)
Ainsworth's study, together with her previous field experiments, have all but wiped out early hopes that increased carbon dioxide might be enough to overcome the other factors and boost yields (D Taub).
Increasing ground level ozone due to global warming will have a devastating effect on crops (July 2014 MIT).

​​The effect of increasing ground level ozone toxicity to green plants with global warming is not included in the IPCC's climate crop models, though an assumed potential benefit of increased ambient CO2 is included. Increased ground level ozone as well as higher temperatures (causing ground level ozone increase) will wipe out any possible benefit from increased CO2.
Although several studies confirm TAR findings that elevated CO2 may ameliorate otherwise negative impacts from ozone (Kaakinen et al., 2004), the essence of the matter should be viewed the other way around: increasing ozone concentrations in future decades, with or without CO2 increases, with or without climate change, will negatively impact plant production, possibly increasing exposure to pest damage (Ollinger et al., 2002; Karnosky, 2003). Current risk-assessment tools do not sufficiently consider these key interactions. Improved modelling approaches that link the effects of ozone, climate change, and nutrient and water availability on individual plants, species interactions and ecosystem function are needed (Ashmore, 2005) ​IPCC 2007 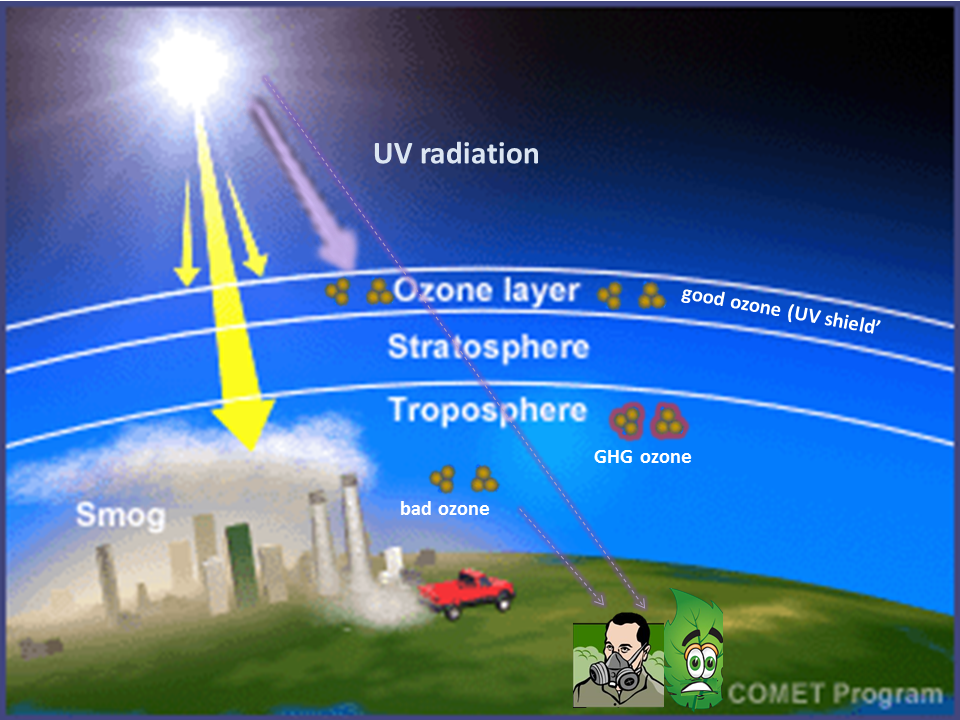 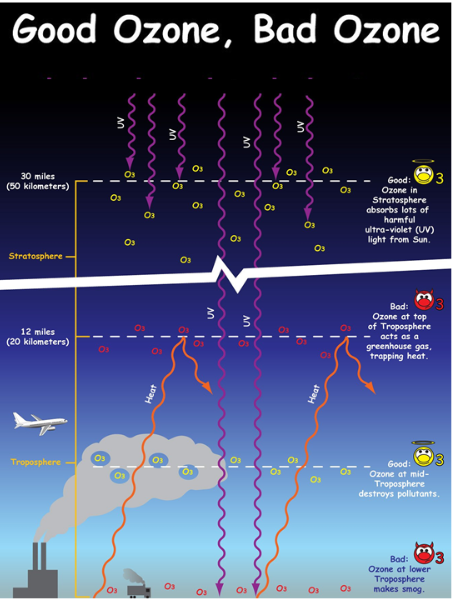 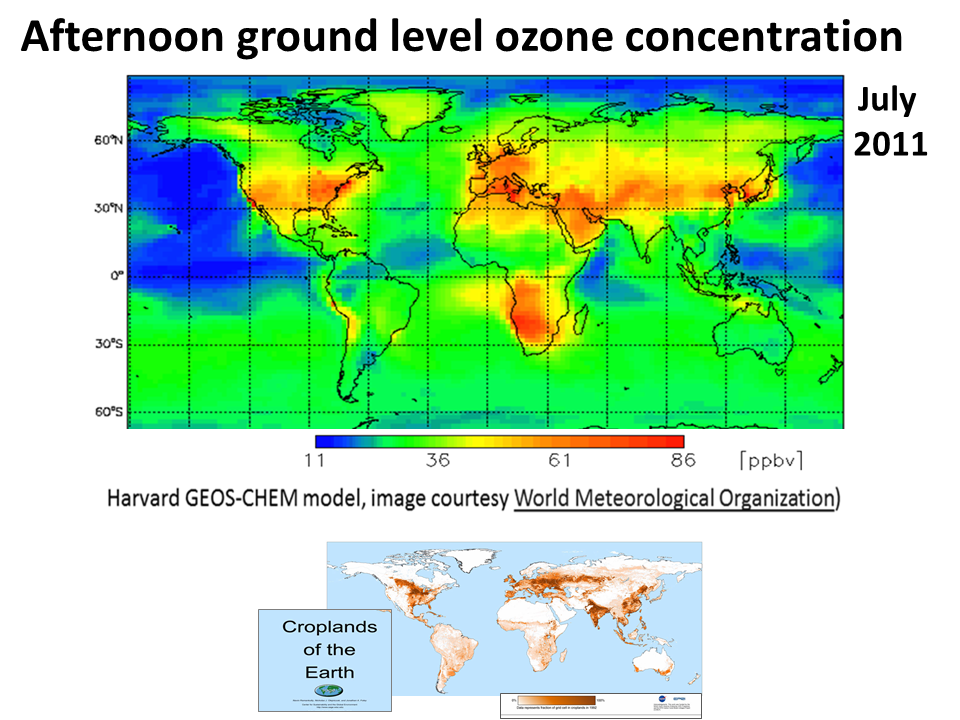 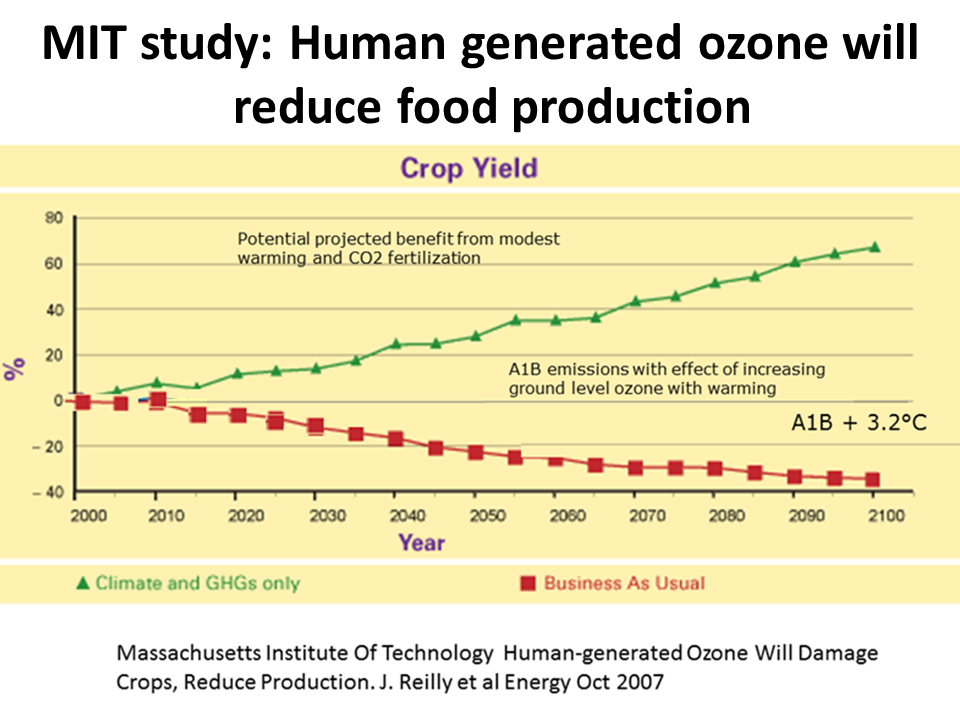 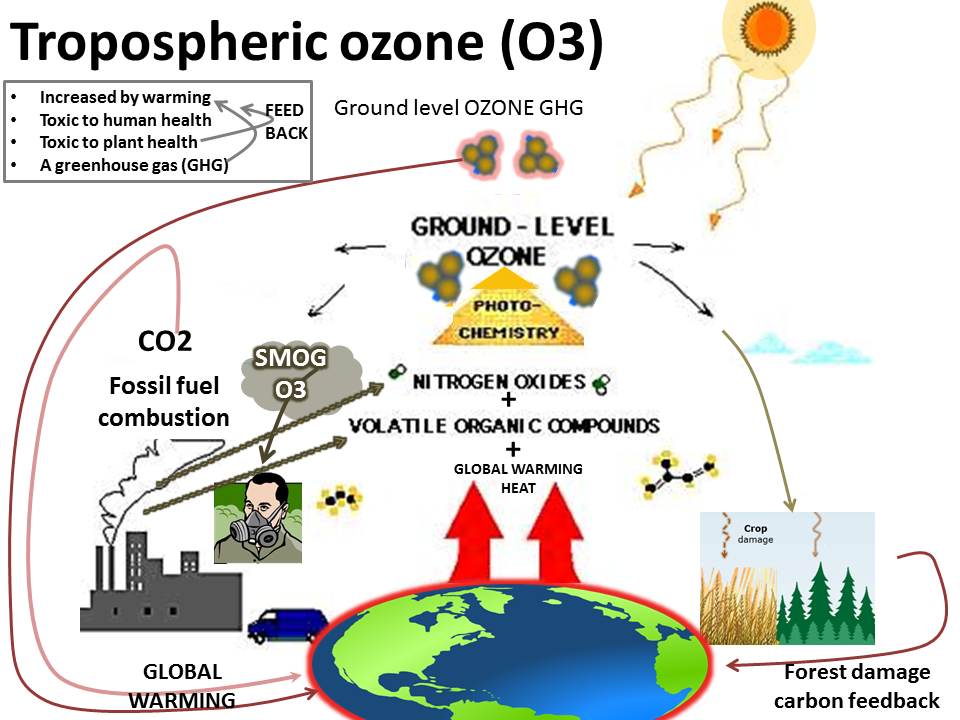